Prickly Pear Land Trust, with the support of the Dowling family,  have re-opened a popular South Hills trail that had been temporarily closed due to access issues

“It’s a really, really big deal,” Prickly Pear Land Trust Executive Director Mary Hollow said. “It secured forever public access on one of the most popular trails in the system.”

Hollow said a portion of the Eddye McClure East trail was built on private property at least a decade ago with permission from the landowner at the time, but a “No Trespassing” sign was posted at the nearby Martinez Gulch parking area after the land was sold over the summer.

Mike Dowling said he purchased the property with his two daughters and their husbands. Dowling said they posted the signs at the recommendation of their attorney, who warned that they could be liable if someone were to get hurt on their land.

However, Dowling said the easement resolves this issue by protecting the landowners from liability and keeping the trail open to the public, which has been their goal all along. “When we all were looking at that piece of property, we all agreed without hesitation that we wanted to maintain access to the trail system,” he said. 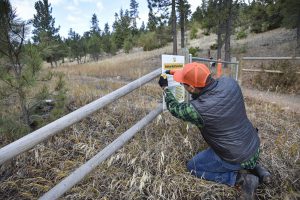