More work needs to be done, but the work that has been done is impressive.

That essentially sums up an article in the Bozeman Daily Chronicle about Gallatin Valley Land Trust’s campaign to ultimately raise in excess of $1.23 million from private land public sources to purchase 12 acres of land at Peets Hill that is privately owned and currently for sale.

GVLT announced it has raised an initial $800,000 from a campaign dedicated to Peets Hill, with approximately 650 donors—perhaps GVLT’s largest number of donors for a single project—contributing to  the cause.

GVLT acted quickly to secure an option to purchase the property and has until mid-January to raise the additional funds. Peets Hill is a Bozeman recreational tradition and was one of the first projects in the Bozeman area to obtain Land and Water Conservation Funds.

GVLT executive director Chet Work said in the article that the land trust will now look at public funds to obtain the remaining funds.

Work noted that the city and GVLT have worked together in the past to conserve land along Peets Hill — starting in the 1990s, when the organization’s founder, Chris Boyd, helped the city purchase much of what now makes up the popular park.

“Peets Hill looks the way it does because of our partnership,” Work said. “(The city was) our first phone call when we were able to secure the property.”

GVLT’s request to the City of Bozeman will follow a public process and GVLT will soon submit a request with an exact dollar amount attached to it. Photo: Peets Hill / Bozeman Daily Chronicle 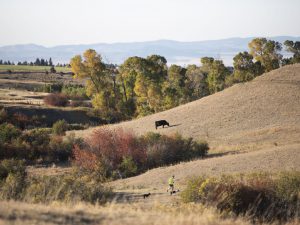