It also adds protection to a critical puzzle piece that is adjacent to 725 acres and near 2,350 acres of land that is already conserved, securing a much larger connected piece of landscape along the lower Flathead River.

A plethora of wildlife use the project property and threatened bull trout and westslope cutthroat trout, a species of special concern, use waters adjacent to the project property. Thousands of waterfowl use not only the river and wetlands on the project property, but also its farmland to feed and refuel on their migration. The conservation easement will keep rich soils identified as “prime farmland” or “farmland of statewide importance” by the Natural Resource Conservation Service in agriculture. The family has been farming and stewarding this wildlife-rich land for almost 100 years.

110 special acres conserved in the Bitterroot that results in a “huge gift” to the valley. Thank you, BC Rimbeaux and Bitter Root Land Trust.

Bitter Root Land Trust Director Gavin Ricklefs remembers sitting on a rock next to Rimbeaux up on the ridge seven or eight years ago talking about the potential of preserving the land with a conservation easement.

“He wanted to make sure that this place was protected as a wildlife corridor and for the viewshed forever,” Ricklefs said. “He had this connection and love for this place that he wanted to find a way to preserve.”

On Dec. 31, Rimbeaux placed a conservation easement on the land without seeking any financial return.

“Considering what the real estate market is doing now in the Bitterroot, it was a pretty big gift,” said Bitter Root Land Trust’s Conservation Director Kyle Barber. “It was pretty selfless, especially considering that he doesn’t live here full time. This was such a huge gift to our community.” 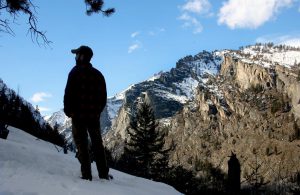 Registration for Prickly Pear Land Trust’s 2021 Don’t Fence Me In Trail Run and Trail Challenge is now open. The virtual race will be held May 8 – June 1 and full information about the Virtual Challenge is available on the PPLT website. From PPLT: All trails are eligible—South Hills trail system, Tenmile Creek Park, Scratchgravel Hills, and anywhere beyond, even your hometown if you don’t live nearby—the goal is to get outside, stay active and be a part of this community’s 21st Annual Don’t Fence Me In Trail Run!

The Vital Ground Foundation and the Flathead National Forest have teamed up to acquire 10 important acres in the North Fork of the Flathead to put the parcel in public hands to protect public access and key wildlife habitat. The LWCF is an important source of funding to complete the project.

“We are fortunate to have partnered with Vital Ground on this conservation acquisition in an area of such high ecological importance,” says the Forest Service’s Hungry Horse and Glacier View District Ranger, Rob Davies. “It is a privilege to be able to manage this land for wildlife benefit, Wild and Scenic River values, and public use for generations to come.”

“This is an outstanding opportunity for collaborative conservation that benefits both people and wildlife,” says Mitch Doherty, Vital Ground’s conservation manager. “With the support of the Flathead National Forest we are bringing more LWCF dollars to Montana to support a growing need for improved public land access and conservation of key wildlife habitat in the North Fork Valley.”

The Rocky Mountain Elk Foundation is a major player in a proposed lower Musselshell River access project that if approved would tap the Land and Water Conservation Fund to consolidate 39,130 acres of BLM land that abuts the Charles M. Russell National Wildlife Refuge and also expand public access to 8,040 acres of BLM land and 1,320 acres of State Trust lands now inaccessible to the public.

A Brett French Lee Newspaper article reports the project includes public acquisition of over 11,000 acres of private land owned by Craig and Barbara Egeland, of Rhame, North Dakota, and the 73 Ranch &  Hunt Club. An environmental assessment on the project is ongoing, and public comments are being taken.

“We are asking for support to get it across the finish line,” Mueller added.

“Acquisition of the lands would facilitate a variety of public recreational activities including hunting, fishing, boating, camping, hiking and wildlife viewing on additional public and state lands that were historically inaccessible to the public,” the BLM’s environmental assessment stated.

In addition to this deal, the EA noted the “U.S. Fish and Wildlife Service is pursuing an acquisition of approximately 756 acres (290 acres in Petroleum County, 466 acres in Garfield County) of privately owned land along the Musselshell River within the current CMR Refuge boundary.” These are adjacent lands also owned by the Egelands, according to Paul Santavy, project leader of the refuge. 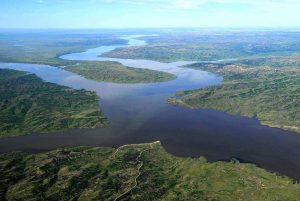 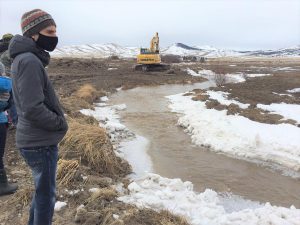 Watching a river flow is always a treat, but watching water flow through a new channel at Sevenmile Creek near Helena is an “incredible” treat.

“This is an incredible day,” said Mary Hollow, executive director of the Prickly Pear Land Trust, which acquired the 350-acre Sevenmile Creek property north of town in 2016 as part of its Peaks to Creeks initiative.

The new channel and overall project produces multiple benefits for the Helena Valley, including an expected reduction in flooding and sediment loading, improved riparian conditions along the stream and restoration of the stream to a healthier condition.

PPLT purchased the property in 2016 and has been improving the 350-acre property ever since.

But this ol’ river keeps on rollin’, though
No matter what gets in the way
and which way the wind does blow
And as long as it does I’ll just sit here
And watch the river flow

Thanks to a strong and diverse coalition of landowners, land trusts, agricultural organizations, local government and outdoor recreation groups, the House Fish, Wildlife & Parks Committee voted 13-5 on Feb. 23 to table HB 352. The actual vote would have been 14-4 but one committee’s proxy vote was incorrectly voted.

HB 352 would have required that any publicly funded conservation easement program – state, local or federal – provide recreational access that was “reasonable and possible” for “enjoyment” of the public. The bill sought to allow unfettered public access to private land, and would have undermined agricultural conservation and county open land programs.

Defeat of HB 352 shows the strength of the land trust community, and the strength of the partnerships land trusts have with landowners, farm and ranch organizations, and outdoor recreation groups. MALT extends a heartfelt Thank You to everyone who participated in the effort to defeat to HB 352.

The first half of the 2021 Montana Legislative Session wraps up on March 3. All committee actions for the first half of the session ended on Feb. 27. HB 352 is not the only Montana legislative bill or bill draft MALT and the land trust advocacy team is working on. HB 471 would deny nonprofit organizations the ability to purchase 161 acres or more of private land. The bill draft is aimed at the American Prairie Reserve but would also impact many MALT member organizations. The bill was not advanced at the legislative transmittal break, but is expected to surface during the second half of the legislative session.

Other potentially troublesome bill drafts – one that would have required county commission and gubernatorial approval of LWCF projects in Montana – look doubtful to advance to bill status.

MALT and attorney Andy Dana found themselves actively engaged with bill sponsors, other county officials, and a local bill drafter on a handful of proposed subdivision, zoning and growth policy bills or bill drafts. Three of the bill drafts sought to repeal the statement of intent section of the Montana open land statute (76-6-102), and MALT strongly opposed that repeal. Bill drafts that contained the repeal were not advanced, but it is an issue MALT will keep its eye on.

MALT has also worked on a handful of other bills, including bills that would impact sage grouse conservation program funding and operations.

MALT extends a thank you to Mark Aagenes (TNC), Dick Dolan (TPL), and key members of the land trust advocacy team including Jon Sonju, Shane Scanlon and Darryl James. The advocacy team is looking forward to more successes during the second half of the legislative session.

Gallatin Valley Land Trust is holding a Trail Re-Mix  Feb. 19-26, a virtual celebration of local trails. The event will feature daily videos, social media posts, and trails updates for the months ahead. A special event feature is an announcement of the 2021 Trail Partner Award. 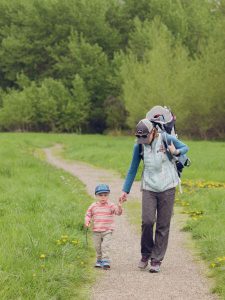 The successful cooperative conservation efforts by The Trust for Public Land and a group of conservation, timber industry, and public agency partners in northwestern Montana are featured in a terrific article in the Flathead Beacon.

The article covers western Montana forestland ownership and conservation for the past couple decades, but focuses on the conservation, forest health, and outdoor recreation results since Southern Pine Plantations bought 630,000 acres of Weyerhaeuser land in late 2019. Back in 2019, there was widespread concern about SPP’s land management intentions and potential impacts of the sale on western Montana ’s culture and economy.

“A collective shudder ran down all our spines, not just for those of us in the conservation community but also for land managers and the timber and outdoor recreation industries, because all those private lands have been de facto public lands for decades and they were suddenly at risk,” Dick Dolan, the Northern Rockies director for the nonprofit The Trust for Public Land, says in the article.

Since 2019 TPL has actively worked with SPP and partners on a series of projects to accomplish conservation and forest management goals.

“Assuming all these projects are fully supported and eventually funded, over 333,000 acres would be open to the public for recreational access and continued forestry management operations in perpetuity,” Eric Moody, SPP’s land specialist, says. “While every acre isn’t protected, and some changes may come, many, many more acres are now protected or set up to be protected than at this point in 2020.”

The plot thickened recently when SPP sold 125,800 acres to a “power couple” from Texas, named Mark and Robyn Jones. They have indicated an early willingness to work with conservation interests and Montana FWP on access, and the story on the 125,800 acres is still waiting to be told. But the tone of the article – rightfully so – is that the past 14 months have been surprisingly positive for the former Weyerhaeuser lands, and TPL is a big reason why.

Montana Land Reliance’s Mark Schiltz hit the target when he described the deal as one of the most important easements in the valley. Given the explosive growth taking place in the valley, “this couldn’t happen at a more important time,” he commented.

The conservation easement not only protects the land from future development, but it will help ensure the lake’s water quality stays pristine and keeps intact important fish and wildlife habitat.

It should be noted that in the early 2000s the Collins also placed their 480-acre property in the North Fork in a conservation easement.

The Flathead Valley certainly owes a tip of the hat to John and Anne for their long-term vision to make this corner of Montana a better place to live, work and play, for generations to come.