The Bozeman City Commission approved an allocation of $800,000 to Gallatin Valley Land Trust to purchase 30 acres on Peets Hill to protect one of Bozeman’s most popular recreation areas.

The Bozeman Chronicle reports the funding is broken down into two purposes…an immediate  $485,000 approval to purchase the 30 acres and $315,000 over the next two years for trail improvements and other management costs.

“Peets Hill has been referred to as Bozeman’s sidewalk in the sky,” Deputy Mayor Terry Cunningham said during the meeting. “I believe that this action tonight helps extend and protect in perpetuity that precious natural feature.”

“This is something that speaks to the people of Bozeman from all parts of the city,” Work said. 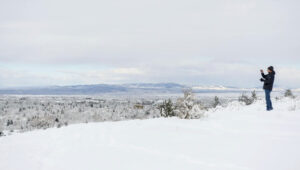