The Nature Conservancy in Montana’s State Director, Amy Croover, was recently featured in an  Indian Country Today News report on the transfer of the Safe Harbor Marsh to the Confederated Salish & Kootenai Tribes.

The edition of Indian Country Today News, on KCWC (PBS), aired in late September and covers several topics. Here is how the host of the show leads into TNC and Amy Croover: “…and in Montana, it’s more than just words (as) Amy Croover from the Nature Conservancy explains. She’s enrolled in the Winnebago Tribe of Nebraska, and tells us of an important land transfer back to the Confederated Salish and Kootenai Tribes.”

“It’s an incredible, inspiring thing that I am so grateful that I was able to be a part of,” said Croover. “The story is very long. The initial purchase of the land that’s located just off of the Flathead Lake, on the Flathead Indian Reservation in northwest Montana. It was purchased in 1989, and at the time The Nature Conservancy in Montana was very focused on biodiversity. And since then we’ve shifted more towards whole ecosystems. So we have this, you know, 132 acres of land, I think from the beginning there was always a hope that someday we could transfer it back to the tribes, the rightful stewards of this land.”

The Indian Country Today show host and Amy discuss a range of additional topics as well.

“…it helps us better understand what we should be restoring those lands to,” said Croover, “and a lot of that was coming from indigenous knowledge. But I would say it’s most important that we allow it to come from them, and so these are deep partnerships that we have built with both the Blackfeet Nation and the Confederated Salish and Kootenai Tribes here in Montana, to learn from them, to partner with them and to better understand how we can help the allies in stewarding their lands.” 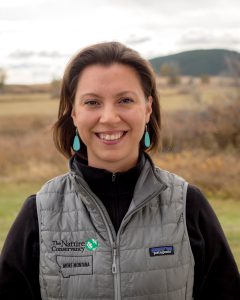