A fact sheet outlines an array of executive actions to “tackle the climate crisis at home and abroad, create jobs, and restore scientific integrity across the federal government.” Among the many proposed actions within the fact sheet is this one: The order commits to the goal of conserving at least 30 percent of our lands and oceans by 2030 and launches a process for stakeholder engagement from agricultural and forest landowners, fishermen, Tribes, States, Territories, local officials, and others to identify strategies that will result in broad participation.

In a news release the LWCF Coalition said: The Land and Water Conservation Fund (LWCF) Coalition today hailed the Biden administration’s executive order addressing climate and environmental justice challenges and calling for the protection of 30 percent of America’s lands and oceans by 2030 (30 x 30). These goals will rely heavily on LWCF, one of the nation’s premier conservation and outdoor recreation tools, to help fuel a targeted and robust land-based response from America’s inner cities to remote wildlands. LWCF Coalition partners and supporters have joined with the American Nature Campaign along with hundreds of conservation organizations, businesses, national leaders, state and local officials, and leading scientists in support of the 30 x 30 initiative.

Andrew Bowman, president & CEO of the Land Trust Alliance, said: President Biden’s executive order calling for conservation of at least 30 percent of the U.S. land base by 2030 is one the Land Trust Alliance applauds. This is an audacious and timely conservation challenge that requires the conservation of millions of acres of land in private ownership. The nation’s land trusts are ready and willing to help private landowners conserve their lands at this ambitious scale. 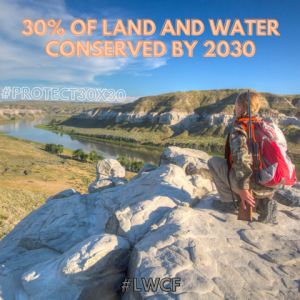