Migrating pronghorn don’t have an easy road, even if times they actually use roads. An article in Lee Newspapers provides information from a new study about a pronghorn herd that has made roughly the same migratory trek between what is now eastern Montana and Alberta for 30,000 years, and documents the kind of habitats needed for the migration to be successful as well as the barriers that make the annual trek so challenging.

The Nature Conservancy in Montana is among groups and agencies that have been working with landowners in eastern Montana on projects such as wildlife friendly fencing to foster wildlife movements. 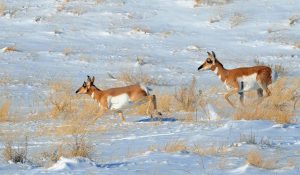