The Montana Land Board unanimously approved Montana FWP acquisition of 106 acres that will ultimately become Somers Beach State Park, a proposal led by Flathead Land Trust that expands and solidifies public access to the north shore of Flathead Lake. FLT has organized support for the project, working with FWP and the Sliter family (current owners of the property) to move the proposal through to land board approval.

From the Flathead Beacon article: The proposal on Flathead Lake’s north shore east of Somers would codify access to a popular half-mile, 106-acre sandy expanse that has long conducted through a handshake agreement with its owners. Under the proposal, Montana Fish, Wildlife and Parks (FWP) would acquire the land for the creation of a state park, and as a way to permanently conserve wildlife habitat while continuing to allow public recreation.

The Sliter family that owns the property began eyeing plans to protect the area earlier this year, and is working in concert with FWP and the nonprofit Flathead Land Trust in an effort to finalize the deal, which has gained broad support. 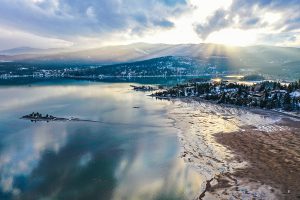