An article in the Flathead Beacon sheds light on the continuing problem of Montana and US agriculture producers surviving the COVID pandemic.

From the article: A few months ago, millions of pounds of potatoes across Montana were either buried or donated, says Ben Thomas, the director of the Montana Department of Agriculture.

“We have a very strong seed potato industry and the impact on the restaurant scene had a huge impact on food supply,” Thomas said. “We ended up with millions of seed potatoes that were not able to find their market.”

The barley industry was also impacted with bars and restaurants closed, Thomas said. Much of Montana’s barley winds up in Mexico where it’s used to make beer. And many of those contracts were canceled when Mexico’s breweries completely shut down right when the pandemic hit. While the barley is currently in storage, Thomas hopes those contracts will be renewed soon, but for now much of the barley is sitting idle.

Despite the market, Thomas says Montana’s crops did well this year after early spring moisture and limited hail.

“I think the general consensus from a production standpoint is it was a phenomenal year,” he said. “We had really high quality crops and really great growing conditions.”

But with record grain, lentil and chickpea yields, Thomas says that much of it is going into storage with declining market prices.

“Crops were great, prices were not,” Thomas said. 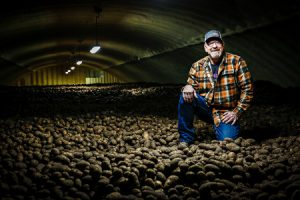