John Ormiston, at the tender age of 82, has put his heart and soul – and his legs – into support for Bitter Root Land Trust.

For about a dozen years now John has hopped on his bike for BRLT, raising money for his local land trust for every mile he rides…and he rides a lot of miles. I can personally attest that once you get on John’s list you are on his list forever, and you will know when John hops on his bike. You will be expected to donate, and you will donate. It’s pretty simple, actually.

A recent Ravalli Republic article about John and his commitment to BRLT and area conservation, is headlined Riding the ‘Root: Ormiston to pedal for 12th year to help Bitter Root Land Trust. The article is full of classic John Ormiston quotes:

“I think so far (in 2020) I’ve had about 129 people pledge to get to that $10,500. Last year, it was about 220. This year I haven’t been able to go to the Audubon meetings or places where crowds gather where I can pass around my clipboard. People know me by my clipboard.”

I know John by his clipboard.

Go John Go. The donation has been sent. 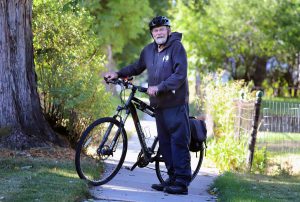