What a week for Bitter Root Land Trust.

In addition to advancing the C. Ben White Memorial Fishing Access Site project, the City of Hamilton and BRLT opened Skalkaho Bend Park in Hamilton, a project years in the making and a project that creates 1.5 miles of river corridor access on a new 70-acre city park in Hamilton.

The park is a new asset for the City of Hamilton residents and visitors, and would not have been possible without Steve Powell’s (a BRLT founder) work and legacy, vital bridge financing from The Conservation Fund, BRLT’s full organizational commitment to see the project to completion, and supporters and funders in Hamilton and elsewhere who made the project not only possible, but reality.

“The entire community used their time, treasures and talents to make this park possible,” Hamilton Mayor Dominic Farrenkopf said. “The park will be enjoyed by the current population and for generations to come.”

“Skalkaho Bend is such a huge win for the residents of Hamilton and for the valley,” BRLT executive director Gavin Ricklefs said. “There aren’t many communities of this size that have that kind of resource that’s open to anyone for free.” 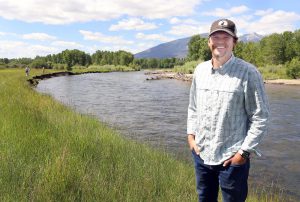