The US Senate just took a huge step toward a generational conservation accomplishment: Full permanent Land and Water Conservation Fund  funding and passage of the Great American Outdoors Act. The House is next. If you enjoy the outdoors, you benefit from the LWCF.

Here are MALT’s statements in support of Montana Senators Steve Daines and Jon Tester, both of whom are LWCF champions.

“Senate passage of the Great American Outdoors Act is a major step toward a potential historic conservation achievement,” said Glenn Marx of the Montana Association of Land Trusts. “Senator Jon Tester was the first to identify the goal of full and permanent LWCF funding as a national policy priority. We in the Montana land trust community are grateful for his longstanding commitment to this goal and we also salute his never-ending efforts that helped make Senate passage a reality today.”

“Senator Daines today asked for ‘overwhelming affirmation’ of the Great American Outdoors Act in the Senate, and thanks to his leadership the Senate delivered exactly that with a 73-25 vote,” said Glenn Marx of the Montana Association of Land Trusts. “Senate passage of the GAOA is a significant accomplishment, but two more major steps are needed: House passage and the President’s signature. When those actions are taken, the Congress and America will have achieved a generational conservation accomplishment, and LWCF champions like Steve Daines will be a major reason why.”

The House is expected to take up the GAOA soon, perhaps as early as before July 4. 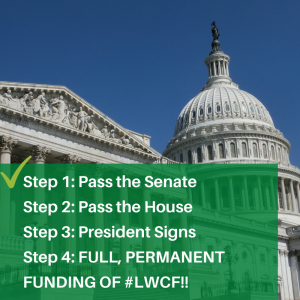