Momentum is building in Washington, DC, and across the country around an effort to include the Great American Outdoors Act – which includes a provision for permanent full funding of the Land and Water Conservation Fund – in the next major COVID-19 stimulus package considered by Congress.

Some evidence of that momentum:

* A May 7 article in E&E News under the headline “Could outdoors bills get an inside track in stimulus?” reports growing public and congressional support for inclusion of the GAOA (S. 3422) in whatever pandemic response legislation Congress develops next. The article reports Montana Senator Steve Daines is actively pushing for Congress to pass the GAOA. Daines is a LWCF leader in Congress.

* The Outdoor Recreation Roundtable, a national group dedicated to outdoor recreation, has voiced strong support for inclusion of the GAOA in any congressional stimulus legislation.

* Over 100 local officials from 11 western states (including Montana) recently signed a letter urging Congress to include full permanent LWCF funding in the next economic stimulus package.

* Over 800 businesses and organizations (including Montana) have signed a GAOA support letter urging Congress to view the GAOA as a legislative priority.

The timing of congressional action on a pandemic response stimulus remains uncertain, and the legislation’s contents are a long way from being finalized, but the belief is there will be a congressionally-approved stimulus bill sometime in the near future. And there is a broad, bipartisan, committed group working to include the GAOA in the stimulus package. 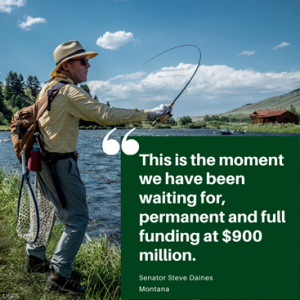