A delightful – and sobering – article about grasslands conservation featuring The Nature Conservancy’s Kelsey Molloy was recently featured on social media. The article is from the Western Landowners Alliance website and offers an informative first-person perspective from Kelsey and her work in the north central Montana grasslands near Malta.

The article is accompanied by bird song recordings and photos, and included in the article are some daunting statistics about bird populations. Case in point one: “Overall, there was a 53% decline in grassland birds since 1970, the highest rate of any group of birds.” Case in point two: “During that time Breeding Bird Survey data (from the US Geological Survey) show that Sprague’s pipits have declined by 71% and McCown’s longspur population declined by 87%.”

The Northern Great Plains grasslands in Montana are rightfully an area of increasing conservation emphasis, with more and more voluntary conservation projects led by an expanding group of funders, organizations and landowners. Thanks to Kelsey and the landowners she works with for their dedication. You can follow Kelsey and her wildflower exploits on Instagram at @Kelsey_of_Malta.

Photo: Kelsey holds an LBB (Little Brown Bird) for tagging and measurement during a bird survey on a private ranch in Montana. 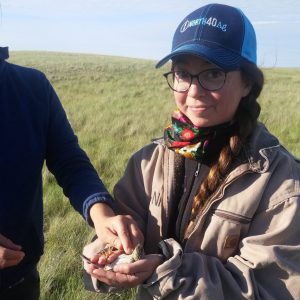