Please join Five Valleys Land Trust and others on Wednesday, July 8 for a free virtual panel discussion, Voices from the Community: Why Access, Equity, and Inclusion Matter.

Where: Online via Zoom (registration link below)

This panel will bring together diverse voices around a common theme: access to the outdoors. During this panel discussion, we will hear from community members who have experienced some of these barriers in their personal and professional lives. Panelists will share their stories and their ideas for ways to make the outdoors more accessible, welcoming, and inclusive to more people. A short Q & A session will follow the program.

Donna Gaukler, Director of Missoula Parks and Recreation, will moderate the panel. Panelists include:

• Ashely Ostheimer Hilliard, Vice Chair of the Board of Directors, Missoula Food Bank and Community Center

The panel will be hosted on Zoom and is free and open to the public.

“…it requires only a brief look under the hood of the beef supply chain to diagnose the grave crisis currently facing American farmers and ranchers, and the growing threat of shortages for every American family who buys meat at the grocery store,” the Senators write. “…in recent decades, the packing industry has become dangerously consolidated. Currently, only four large corporations control 80 percent of America’s meat processing capacity, running massive processing plants and industrial feed lots.”

Then came COVID. “…the pandemic, which has exposed the dangers of this consolidated industry by infecting thousands of plant employees, shutting down a quarter of our nation’s meat processing capacity, making it more difficult for families to find meat at the grocery store, and jeopardizing our nation’s food supply chain,” they write.

The two Senators have introduced legislation to stem manipulation of cattle prices by meat packers to help livestock producers obtain more opportunity to get a fair price for their products. The two Senators point out it is not just ranchers impacted by packer monopolies but consumers as well.

On July 1 the Lewis and County Commission voted 3-0 to create a 30-day comment period on a proposed 3,122-acre conservation easement east of Helena in the Spokane Hills. In June, the proposed project had also received unanimous approval from the Lewis and Clark County Open Lands Citizen Advisory Council. After the 30-day comment period the Potter Ranch conservation easement will come back to the county commissioners for a final decision.

“I am bursting with joy,” says Mary Hollow, the Executive Director of the Prickly Pear Land Trust. “These projects take years and they are highly emotional for families to discuss things about their estate and about their land, especially when they are generational ranches like this.” 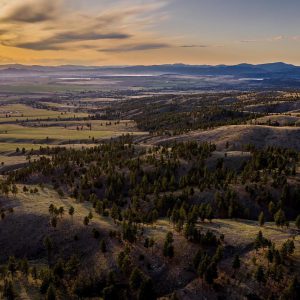 With the Senate Finance Committee investigation ongoing, with June 30 IRS vocal support of Senator Daines’ anti-syndication legislation, with a string of IRS court victories against syndicators, and with an IRS one-time “take it or leave it” settlement offer on the table, coordinated efforts to stop abusive syndicated conservation transactions seem to be gaining traction.

At a June 30 Senate Finance Committee hearing, Montana Senator Steve Daines, lead sponsor of the Charitable Conservation Easement Program Integrity Act, asked IRS Commissioner Charles Rettig if the IRS would support legislation stopping the syndication of conservation easement tax benefits. The Commissioner’s response was: “The IRS would welcome legislation with respect to syndicated conservation easements — the abusive transactions. Under this commissioner, the IRS will aggressively go after everybody involved in one of those transactions.”

The Charitable Conservation Easement Program Integrity Act (S.170) is the Land Trust Alliance’s top federal policy priority, and is legislation strongly supported by the Montana Association of Land Trusts membership. The Alliance’s blog featured the June 30 exchange between Senator Daines and Commissioner Rettig. In an example of the abusive nature of a syndicated transaction, Daines cited a property that had been valued at $30 million, then with a conservation easement placed on it the property had an alleged value of $155 million. Such transactions cost taxpayers billions of dollars each year…in 2016 alone, 248 syndicated deals claimed $6 billion in charitable deductions.

In related action, Bloomberg reported on June 25 that the IRS was offering syndicators a chance to settle, with a warning “that it is the best deal participants will get.” The settlement offer would “specify that the deduction for the contributed easement will be completely disallowed and the partnership will have to pay the full amount of tax, penalties, and interest owed. But investor partners would be allowed to deduct their cost of acquiring their partnership interests and pay a penalty reduced by between 10% to 20%.”

Bloomberg reports the IRS has prevailed in a series of court decisions which provides the IRS a position of strength in any settlement discussions.

“This is no sweetheart deal—and it should not be one,” said Andrew Bowman, president and CEO of the Land Trust Alliance, a national conservation organization that has consistently opposed the deals. “This is an emphatic reminder to all investors that they should steer clear of abusive conservation easement tax shelters.”

“Recent decisions by the U.S. Tax Court demonstrate what we have long known: that abusive syndicated conservation easement deals are costing taxpayers billions and tarnishing the reputation of this very valuable conservation tool,” Daines said in his comments to IRS Commissioner Rettig.

The syndicators themselves, led by a group named Partners for Conservation, voiced opposition to the proposed settlement terms.

Flathead Land Trust’s annual event, A Land Affair, has been postponed to the summer of 2021 in light of concerns about the COVID pandemic. But like many other Montana land trusts, FLT is adjusting and rallying, and is going virtual. From the recent FLT newsletter:

Let’s party for the land, virtual style…& Raise the Sky for Conservation!

Join us on August 13th to celebrate impactful conservation that’s being accomplished in 2020. We’ll be hosting an online event and program with a “raise the sky for conservation” live drive and virtual cocktail hour. We’ll also be offering virtual tours of our conservation properties leading up to the event. No ticket purchase needed. We just want to celebrate with you this year, even if we can’t do it in person.

RSVP for your spot by emailing Paul Travis. Save the Date and stay tuned for more details coming soon! 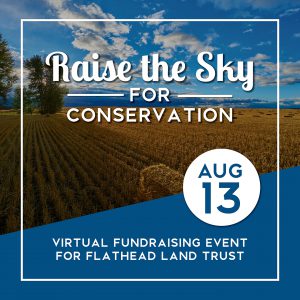 Five Valleys Land Trust is among the land trusts featured in an article titled “Interpreting the Land” in the summer 2020 edition of Saving Land Magazine. 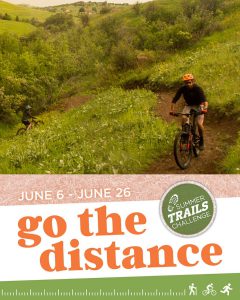 Are trails important to you? If so, then you might want to hear from the panelists who’ll be participating in the Universal Trails and Outdoors for Everyone Virtual Panel from 4:00 – 5:15 PM on July 8. The panel discussion lis  titled Voices From the Community: Why Access, equity and Inclusion Matter.

Full information about the panel (and the July 9-10 trails workshops) is available on the Five Valleys Land Trust website.

On Saturday morning, June 20, I entered “Kila Pub” into Google Maps to make sure I would arrive on time at the Flathead Land Trust starting point (Pub’s parking lot) for the 2020 Smith Lake Bike and Bird Tour.

The lady in my phone promptly announced “the pub will not be open when you arrive.” Well, that’s not a good way to start the day, I thought. Things have to get better than that.

And they did. I got to join Flathead Land Trust’s Paul Travis and Laura Katzman, Flathead Audubon birders and close to 40 FLT supporters for a 8.5 mile bike tour around the Smith Lake Waterfowl Production Area and adjacent FLT conserved lands.

It was another great outdoor event by FLT. The tour showcased strategic conservation efforts of FLT and other land trusts (over 2,000 acres conserved) in the Smith Valley, and the success and value of that mix of public and private conservation properties.

During an afternoon tour with Laura, and Josh Covill from Audubon, I learned things like there are six species of swallows that reside in western Montana, that Josh had recently spotted 71 different species of birds along a two mile dirt road stretch near Smith Lake, and that a bird we saw named the eastern kingbird (Tyrannus tyrannus) is pretty much a bad ass.

Thanks to Laura and Paul for allowing me to tag along on the tour. It was a terrific event by a land trust doing great work in the Flathead.

(Photo: Laura Katzman makes a point during the tour) 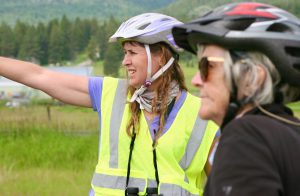 Kaniksu Land Trust debuted its new logo and presented its 2019 Annual Report on June 17, and on June 18 officially and broadly shared its new logo with supporters and the Sandpoint community.

Scroll back to top